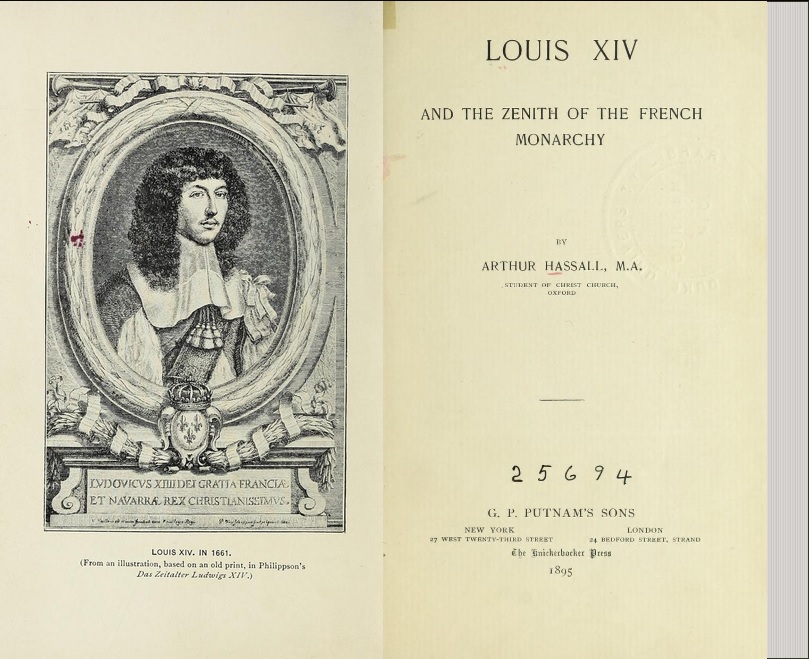 Louis XIV and the zenith of the French monarchy (Arthur Hassall, 1923)

THE character and position of Louis XIV are peculiarly difficult to estimate, partly on account of the attitude taken towards him during his life time by his own subjects, partly owing to the entire misapprehension under which foreign nations laboured as to his real aims. The French people during more than two-thirds of his long reign made him into a god and worshipped him, while at the time of the Spanish Succession war a generation had grown up in England which, says Mr. Wyon in his History of Great Britain during the Reign of Queen Anne, regarded « Louis XIV as a monster of ambition with a mission from the devil to make slaves and Papists of the whole human race, a perfidious tyrant with whom it was useless to think of entering into a compact, whom it was absolutely necessary to bind with chains of iron. »

Again at the present day, modern historical writers, for the greater part hailing from France, are well- nigh unanimous in wholesale condemnation of the age of Louis XIV on the ground that it was essentially the cause of the French Revolution. Even allowing that it be strictly historical to say that Louis reign made the Revolution inevitable, it remains none the less true that the blame, if there be any, must be shared by the people with the King. The French nation made Louis, and Louis was the epitome of the French nation. It is easy to sympathise with the many hostile criticisms levelled at the King by German historians, who cannot forgive the devastation of the Palatinate or forget the loss of Strasburg. But it is peculiarly ungracious, ungrateful, and unhistorical for French writers who are well acquainted with the history of their own country, to allow themselves to be so carried away by feeble republican predilections, as to pour virulent abuse upon the most brilliant period of their history, and their most hardworking, painstaking, and on the whole successful ruler.

Louis has certainly as great a claim as Napoleon to be considered a Hero. He, at any rate, left his country holding a powerful position in Europe, and when he died he could boast that his foes had never entered Paris. In spite of his mistakes he succeeded in placing Philip on the Spanish throne.

The French Revolution undoubtedly tended for a long time to damage Louis reputation and to blind men to the real character of his work. And yet the Revolutionists only developed Louis system of internal administration, and continued with vigour and success his foreign policy. To credit Louis with the evils under which France suffered during the eighteenth century is to ignore the history of the reigns of Louis XV and Louis XVI. These monarchs, it is true, found themselves handicapped through the position of the nobles and the weight of taxation. But had they been energetic and enlightened administrators, had they adapted themselves to the needs of the day, France might by securing timely reforms have escaped from the horrors of revolution. As it was, when Louis established a bureaucracy dependent on an absolutism, he gave the French government the shape which it preserved unchanged till 1789. His administrative reforms were admirably suited to the France of his own day. It was the fault of his successors that the bureaucratic system became an impassable barrier between the people and their rulers.

There is no doubt whatever that with the majority of his countrymen the rule of Louis XIV was in the seventeenth century extremely popular. It was admirably calculated to arouse the enthusiasm of his subjects. The French, more than any other European nation, have always been most easily affected by the love of military glory. They have of all nations ever been sensitive of their prestige, and appreciative of a brilliant foreign policy.

Louis reign was, as far as military glory was concerned, the most glorious in the annals of French history, and never did the prestige of the French arms stand higher. Even at the end of the Spanish Succession war, that prestige was nobly maintained by Villars. At no period in French history was the foreign policy of France conducted with greater ability or with more conspicuous success. In the clearness of his views on foreign policy, Louis was always essentially a Frenchman, while in his dogged perseverance, his close attention to details, his careful grasp of facts, and his recognition of the necessity of withdrawing from untenable positions, he showed that he possessed characteristics rarely found among Latin nations. Unlike George III., who never rose to a higher level than that of most of his subjects, Louis was in many respects head and shoulders above the majority of the Frenchmen of his day. And he was really great when dealing with questions bearing on the future welfare of France as a European Power. His foreign and colonial policy is superior to that of any of his predecessors or successors and should be keenly appreciated by his countrymen of the present day.

An unerring instinct told him that Belgium should be in French hands. He was equally bent upon securing Lorraine, Luxemburg, and Savoy. His attempts to make the Mediterranean a French lake showed consummate statesmanship, while if his colonial, Indian, and Siamese projects had been continued and wisely developed by his successors, France would have very practical reasons for looking back on his reign with gratitude and respect.

Whether he was revoking the Edict of Nantes, or was avenging an insult offered to his ambassador, or was appealing to the patriotism of the people against the impolitic demands of the insatiable allies after Oudenarde, Louis was always in touch with the majority of his subjects. He set a great value on himself as the holder of the kingly office and the nation accepted his estimate of its importance. In spite of the many faults of his rule, France was ably administered during his reign. The noble class, who hitherto had influenced the government of the country, were unfit to take any share in the administration. Like the Parisians of all time, they were wanting in balance, they had no principles, they were carried away by every passing impulse. The conduct both of the nobles and the Parisians during the Fronde troubles amply justified the establishment of a strong centralised monarchy. Accepted by the French nation as the only form of government possible after the years of anarchy, it soon became thoroughly popular.

In spite of the criticisms offered by Madame de Sevigne, Gui Patin, Bussy-Rabutin, and Ormesson, royalty came to be regarded by a large majority of the nation as the glorious personification of the unity and power of France. And with his natural acuteness of observation, his decision, and his grand manner, Louis satisfied the aspirations of his people. For more than fifty years he had the most brilliant Court in the world, and he directed the affairs of France and Europe with a magnificence which the reverses at the end of his reign could not efface. The history of the world presents few epochs on which civilisation and literature have thrown greater éclat than that of Louis XIV.

Louis was thus pre-eminently a Frenchman in the unique sympathy that existed between him and the nation a sympathy seen in their aims, in love and in hate, in taste and in prejudice. As a man he may not have been great, but a great King he certainly was, and the age in which he lived and which bears his name was a great age. Whatever claim he may bear to the title of Hero must be based upon the determination and courage shown during the last fourteen years of his reign. In spite of the calamities which the war brought upon his country, in spite of the domestic afflictions which wellnigh overwhelmed him, Louis skill and ability and courage succeeded, with honour and with comparatively small territorial loss, in extracting France from a death grapple with Europe. Few periods in the reign of any European monarch present more striking examples of real patriotism and heroism than will be found in the history of the great King of France during the years from 1707 to 1713.