On 26 September 1896, within a fortnight of their arrival, the Sestiers had organised a preview of the Lumière Cinématographe at George Musgrove and JC Williamson’s Lyceum Theatre on Pitt Street, Williamson having donated the theatre for the afternoon preview. Subsequent reports of the preview promised the public a show not to be missed.

The Salon Lumière was situated at 237 Pitt Street, Sydney, a few doors down from the Lyceum Theatre. This two-storey building of five rooms had, throughout its life, provided premises for a tailor, a shoe shop, a fancy goods store and warehouse, as well as a studio for Stewarts Photographers. Prior to the opening of the Salon Lumière, the ground floor of 237 Pitt Street had been a branch of Lewis Phillips Auctioneers.

As auction rooms the premises provided a sizeable open space for seating, with chairs placed towards the large 10-by-12 foot screen with its highly decorated ornamental frame. Under the management of CB Westmacott, Musgrove and Williamson’s Sydney theatre manager, together with high society and theatrical photographer Henry Walter Barnett, the program presented by the Sestiers consisted of 12 films with new programs being constantly offered.

It was on the Salon Lumière’s last night, 27 October 1896, that Australia’s first film Passengers Leaving the SS Brighton at Manly was screened with the promise of more Australian films to come. The next day the Sestiers and Walter Barnett left for Melbourne to fulfil other commitments and where they would work together at the Melbourne Cup Carnival, shooting 15 films. 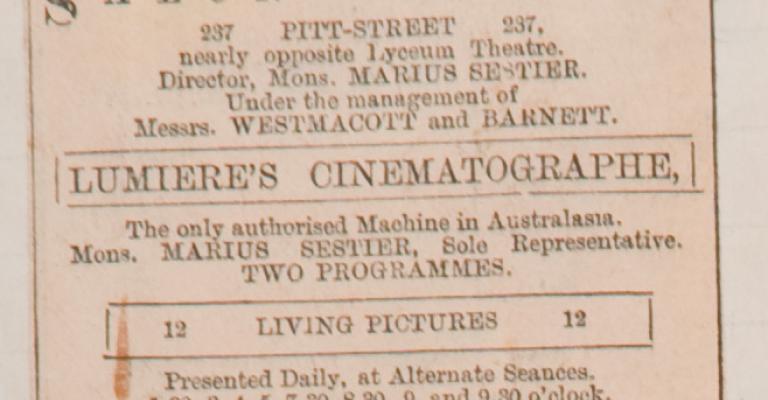 Documents from Marius Sestier’s family and colleagues provide valuable information about this time.

In Bombay, the Sestiers advertised for a local interpreter and someone who could teach them English. The first half of a scrapbook is their English lessons and it shows how they struggled with the differences between French and English. The second part of the book is full of press cuttings of their shows in Bombay.

In Adelaide, the Lumiére Cinématographe was the headline act at the Theatre Royal over all the other acts, including their one time competitor Carl Hertz. Hertz was the first person to show films in Australia, in Melbourne on 17 August 1896.

The Sestiers kept scrapbooks of all their tours. In the book of their Sydney season it shows that they also kept tabs on their competitor, Harry Rickards at the Tivoli.

In 2006, film curator Sally Jackson appealed via a genealogical website for the whereabouts of descendants of French pharmacist and frères Lumière representative to Australia, Marius Sestier. In late 2008, Sestier’s great-granddaughter, Madame Petitbois, replied via email.

Through Sally Jackson’s contacts in Paris, Madame Anne and Monsieur Jacques Canal, a meeting was arranged with the Sestier family. They gathered in Sauzet, Marius Sestier’s birthplace, in December 2008 to meet with the local historian Madame Milon. Family members shared information and photographs and Madame Milon passed on information about their ancestors. The group took a tour through the village and Jacques Canal filmed both the meeting and the tour.

In late 2009, the family agreed to the NFSA’s access to Marius Sestier’s original documents relating to his career as a frères Lumière representative in India and Australia between 1896 and 1897. The collection comprises two scrapbooks of press cuttings from Australia; one exercise book of press cuttings from India and his English language lessons; two bank books and one notebook of accounts and daily activities. Other personal and family history items such as photographs, Sestier’s 1902 driver’s license, and his military record were also included. This is the first time these documents have been placed in a collecting institution’s hands.

A search for the provenance of original frères Lumière films in the NFSA’s collection revealed a direct link to Marius Sestier through a Franco-Australian family in Perth. The Antoine family held the films until the 1950s when they passed out of their care, resurfacing in 1979 as part of an STW9 documentary Our French Connection. The Antoine connection was through an uncle, Monsieur Georges Boivin, who acquired the films directly from Marius Sestier in 1897. Through a daughter, Julie Dyson, the family are kindly making available documents and photographs relating to Sestier’s time in Australia.

Read more of Sally Jackson’s research about the Marius Sestier Collection at Screening the Past.