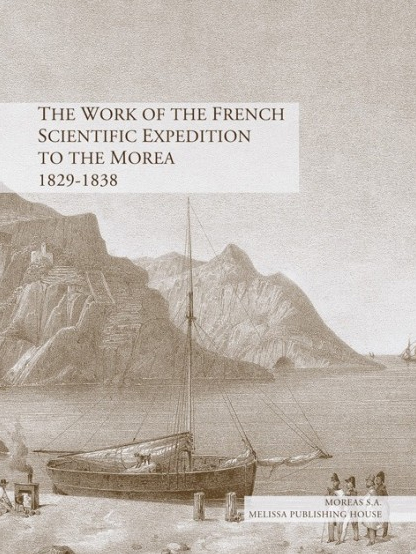 In 1829, during the Greek War of Independence, the French government gave its backing to the Scien­tific Expedition to the Peloponnese (Morea), which soon began to carry out a thorough historical, geographical, archaeological and pictorial documentation of the region. The material collected by the French scientists, artists and officers-surveyors was processed and published in France between 1831 and 1838 in four volumes and a large Atlas by the Natural Sciences Section of the Expedition, as well as three large-format volumes prepared by the Architecture and Sculpture Section. These include accounts of the journeys, scores of maps and a vast array of data regarding the conditions in the region, as well as the state of ancient and more recent remains. Pride of place among the French achievements was the Map of the Morea (1832). It is no exaggeration to say that the Expedition’s work marked a watershed in the documentation of Greek lands.

Despite its success, wealth of material and enormous value for science and for the country, the work of the French Scientific Expedition has not been given the recognition it deserves, and has remained somewhat hidden from the view of the wider public.
Today’s Greek edition includes original contributions by over 25 Greek and French researchers from different fields, all with expertise on the Peloponnese, and aims at giving a wider readership the opportunity to learn more about the illustrative and cartographic docu­mentation, various previously unpublished maps, and other accounts by members of the Expedition. It consists of three parts, which correspond to the Natural Sciences Section (Part I, printed), the Architecture & Sculpture Section and the Archaeology Section (Part II, forthcoming), Botany and Zoology Section (Part III, forthcoming) of the Expedition. All parts include numerous illustrations of exquisite artistry created by the scientists and artists of the Expedition.
Part I consists of 66 facsimile sheets of maps, engravings and drawings selected from French originals, and an accompanying book with critical essays.
.
.
.