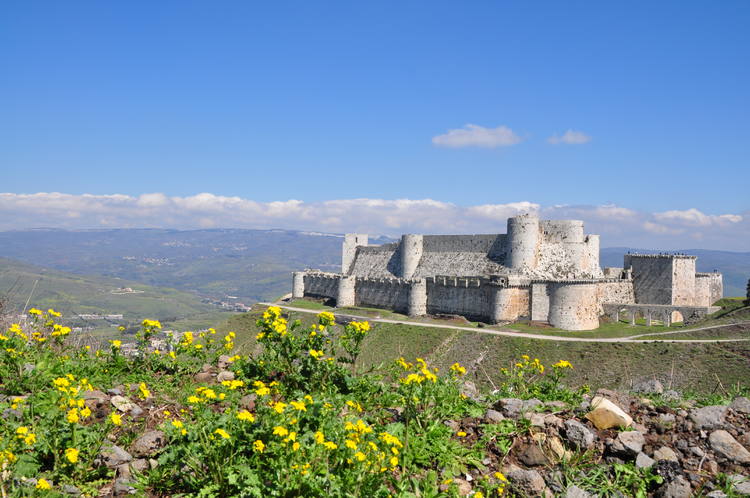 These two castles represent the most significant examples illustrating the exchange of influences and documenting the evolution of fortified architecture in the Near East during the Byzantine, Crusader and Islamic periods. The Crac des Chevaliers was built by the Hospitaller Order of Saint John of Jerusalem from 1142 to 1271. With further construction by the Mamluks in the late 13th century, it ranks among the best-preserved examples of the Crusader castles. The Qal’at Salah El-Din, even though partly in ruins, retains features from its Byzantine beginnings in the 10th century, the Frankish transformations in the late 12th century and fortifications added by the Ayyubid dynasty (late 12th to mid-13th century). Both castles are located on high ridges that were key defensive positions.

Dominating their surrounding landscapes, the two castles of Crac des Chevaliers and Qal’at Salah El-Din are outstanding examples of fortified architecture relating to the Crusader period. Their quality of construction and the survival of historical stratigraphy demonstrate the interchange of defensive technology through features of each phase of military occupation.

Criterion (ii): The castles represent a significant development in the fortification systems, which substantially differed from the European rather more passive defence systems, and which also contributed to the development of the castles in the Levant. Within the castles that have survived in the Near East, the property represents one of the most significant examples illustrating the exchange of influences and documenting the evolution in this field, which had an impact both in the East and in the West.

Criterion (iv): In the history of architecture, the Crac des Chevaliers is taken as the best preserved example of the castles of the Crusader period, and it is also seen as an archetype of a medieval castle particularly in the context of the military orders. Similarly, the Qal’at Salah El-Din, even though partly in ruins, still represents an outstanding example of this type of fortification, both in terms of its quality of construction and the survival of its historical stratigraphy.

Both castles are located on hill tops dominating visually the surrounding landscape. Apart from some undesirable interventions in the buffer zones, the integrity of the surroundings is well preserved. The illegal constructions (some houses, restaurants and hotels) that have been built near the castles will be demolished. There are also plans for cable cars and an open-air theatre, which would not be in harmony with the integrity of the landscape.

The Crac des Chevaliers was subject to some limited restoration during the French mandate, while the relatively recent additions by local villagers were removed. The medieval structures were liberated of accumulated soil. As a whole it has well retained its authenticity.

The Qal’at Salah El-Din is located in an isolated region and was not subject to any changes in recent centuries. It has partly fallen in ruins, and is now an archaeological site. It has been subject some restoration. For example, the main gate of the Ayyubid palace was restored in 1936, imitating the original structure. This type of restoration has now been abandoned, and the main emphasis is on consolidation and conservation. As a whole, the fortress has retained its historic condition and authenticity.

The DGAM is the agency responsible for the protection of heritage sites and the funds for the maintenance and care of the castles are guaranteed from its annual budget. Each castle has a separate management system, organized jointly by the DGAM in collaboration with the local authorities. In the case of Crac des Chevaliers, the management system involves the village of al-Hosn, and in the case of the Qal’at Salah El-Din, the DGAM collaborates with the department located in the regional capital of Latakieh.

At the time of inscription, the DGAM was in the process of adopting a new administrative structure with new regulations that would be integrated so as to allow for a unified management system for the Castles of Syria. There is an on-going need to protect the eastern slopes of the Crac de Chevaliers from the development of the nearby modern city. The necessary administrative procedures have started to ensure the removal of irregular buildings near the castles.