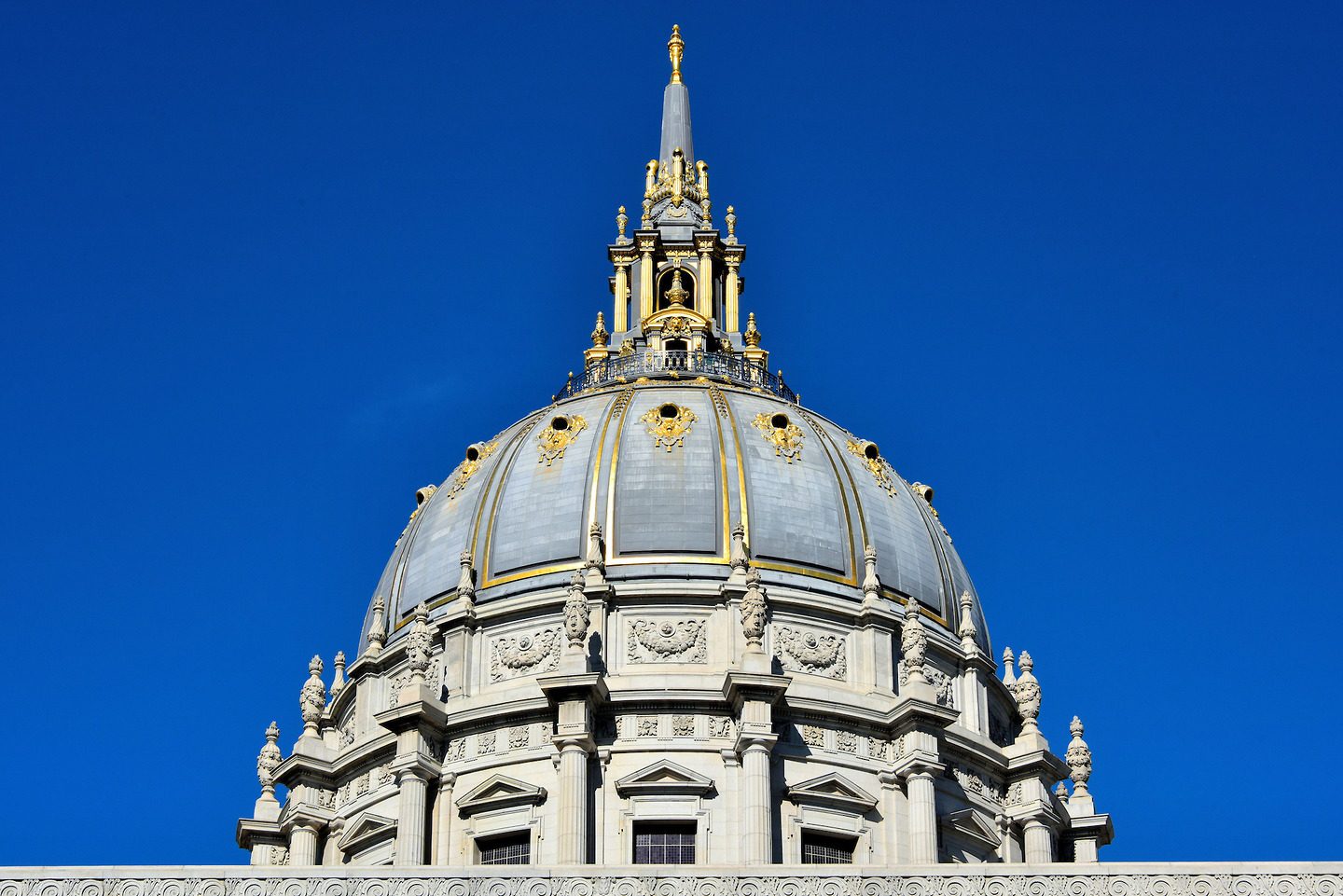 Stunning is one of several superlatives that comes to mind when you stare up 390 feet to the peak of the gilded dome on San Francisco’s City Hall. The design was inspired by the Dôme des Invalides which is not surprising because the architect, Arthur Brown, Jr. studied at the École des Beaux-Arts in Paris. Built in 1915, this 23.5 karat gold leaf dome is the tallest in the U.S. and the world’s fifth largest.

From 1849 to 1850, the Office of the Alcalde (mayor) of Yerba Buena functioned as City Hall. On May 9, 1850 City Hail moved to the corner of Kearny Street and Pacific Avenue, and in 1852, City Hall was relocated to the Jenny Lind Theater, at Kearny near Washington Street.

In 1872, Old City Hall began construction at Larkin Street near Grove. In 1899, Old City Hall was finished in a swirl of scandal after 27 years of construction and $6 million in costs. The April 18, 1906 Earthquake of magnitude 8.3 on the Richter scale subjected old City Hall to peak ground acceleration of from 40 to 60 gravity forces. The building that took 27 years to build fell in 28 seconds of significant seismic motion; only the dome remained intact.

In 1909, corruption-weary San Francisco voters turned down an $8 million bond issue to rebuild City Hall. In 1911, James “Sunny Jim » Rolph was elected as mayor; he promised to unite the diverse communities the city and build a new City Hall and Civic Center Plaza. In 1911, a new building at 1231 Market Street served as temporary City Hall; it was used from 1912 to 1917. In March 1912, San Francisco voters approved an $8.8 million bond issue to build a new City Hall. A design competition for the new City Hall was announceed, but limited to architects with registered practices in California with offices in San Francisco.

In April 1978, San Francisco City Hall received a special award from the American Institute at Architects as one of the finest examples of French Renaissance architecture in the country. On October 10, 1978, the San Francisco Civic Center was designated a National Historic Landmark District, with City Hall listed as a Contributor Building. It is one of only 100 such landmarks in California.

On October 17, 1989, the magnitude 7.1 Loma Prieta earthquake subjected City Hall to peak ground acceleration of up to .10 gravity forces. Significant earthquake motion lasted for about eight seconds. The dome twisted on its steel frame like a cap on a bottle, moving two inches. Cracks in the walls and concrete floor slabs occurred at all levels. In June 1990, San Francisco voters passed a $332.4 million general obligation bond for repair and seismic retrofitting of 191 city buildings damaged in the Loma Prieta earthquake, including City Hall. In November 1995, San Francisco voters approved a $63.5 million general obligation bond issue for funding additional improvements to City Hall.

On February 13, 1998, a four-alarm fire started 200 feet above ground, after welders left the wooden substructure of the dome smoldering. The damage was quickly repaired, and the entire dome was resurfaced. On January 5, 1999, San Francisco City Hall re-opened for civic and public use. The whole of San Francisco’s civic center is a National Historic Landmark District, of which the City Hall is a major part. The Civic Centre is one of 16 National Historic Landmarks in San Francisco, including the cable car, the Presidio of San Francisco and the Old Mint.

The Rough Guide to San Francisco and the Bay Area