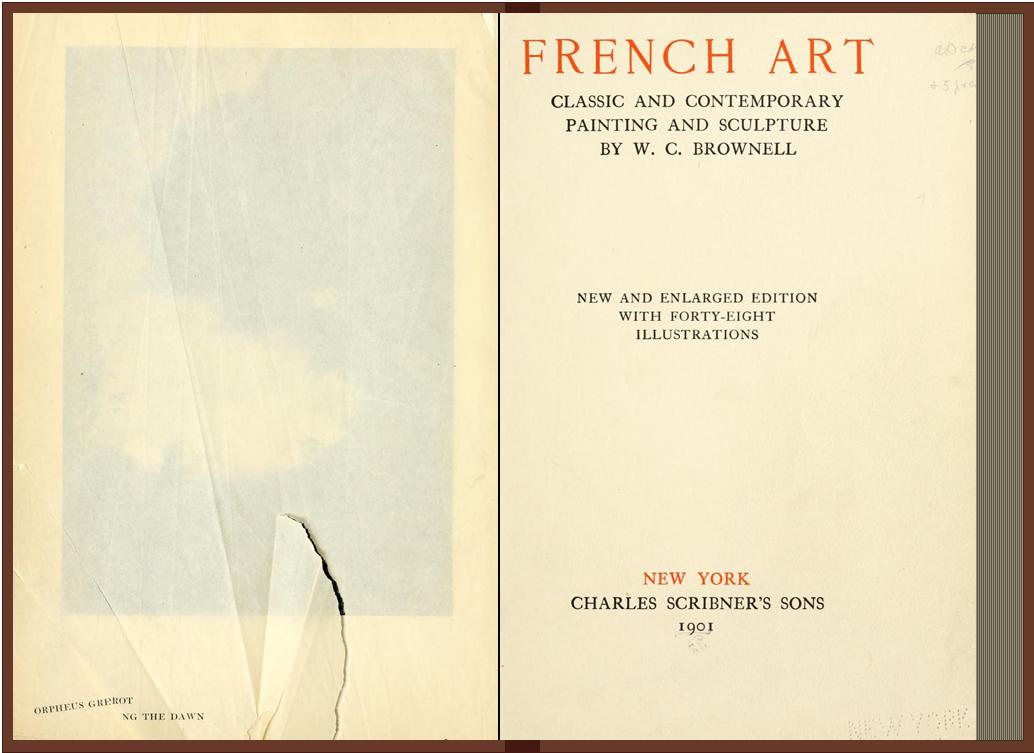 MORE than that of any other modern people French art is a national expression. It epitomizes very definitely the national aesthetic judgment and feeling, and if its manifestations are even more varied than are elsewhere to be met with, they share a certain character that is very salient.  Of almost any French picture or statue of any modern epoch one’s first thought is that it is French. The national quite overshadows the personal quality. In the field of the fine arts, as in nearly every other in which the French genius shows itself, the results are evident of an intellectual co-operation which insures the development of a common standard and tends to subordinate idiosyncrasy.  The fine arts, as well as every other department of mental activity, reveal the effect of that social instinct which is so much more powerful m France than it is anywhere else, or has ever been elsewhere, except possibly in the case of the Athenian republic. Add to this influence that of the intellectual as distinguished from the sensuous instinct, and one has, I think, the key to this salient characteristic of French art which strikes one so sharply and always as so plainly French. As one walks through the French rooms at the Louvre, through the galleries of the Luxembourg, through the unending rooms of the Salon he is impressed by the splendid competence everywhere displayed, the high standard of culture universally attested, by the overwhelming evidence that France stands at the head of the modern world aesthetically—but not less, I think, does one feel the absence of imagination, opportunity, of spirituality, of poetry in a word. The French themselves feel something of this. At the great Exposition of 1889 no pictures were so much admired by them as the English, in which appeared, even to an excessive degree, just the qualities in which French art is lacking, and which less than those of any other school showed traces of the now all but universal influence of French art. The most distinct and durable impression left by any exhibition of French pictures is that the French aesthetic genius is at once admirably artistic and extremely little poetic.

It is a corollary of the predominance of the intellectual over the sensuous instinct that the true should be preferred to the beautiful, and some French critics are so far from denying this preference of French art that they express pride in it, and, indeed, defend it in a way that makes one feel slightly amateurish and fanciful in thinking of beauty apart from truth. A walk through the Louvre, however, suffices to restore one’s confidence in his own convictions. The French rooms, at least until modern periods are reached, are a demonstration that in the sphere of esthetics science does not produce the greatest artists —that something other than intelligent interest and technical accomplishment are requisite to that end, and that system is fatal to spontaneity. M. Eugene Veron is the mouthpiece of his countrymen in asserting absolute beauty to be an abstraction, but the practice of the mass of French painters is, by comparison with that of the great Italians and Dutchmen, eloquent of the lack of poetry that results from a scepticism of abstractions. The French classic painters — and the classic-spirit, in spite of every force that the modern world brings to its destruction, persists wonderfully in France — show little absorption, little delight in their subject. Contrasted with the great names in painting they are eclectic and traditional, too purely expert. They are too cultivated to invent. Selection has taken the place of discovery in their inspiration. They are addicted to the rational and the regulated. Their substance is never sentimental and incommunicable. Their works have a distinctly professional air. They distrust what cannot be expressed ; what can only be suggested does not seem to them worth the trouble of trying to conceive. Beside the world of mystery and the wealth of emotion forming an imaginative penumbra around such a design as Raphael’s Vision of Ezekiel, for instance, Poussin’s treatment of essentially the same subject is a diagram.

On the other hand, qualities intimately associated with these defects are quite as noticeable in the old French rooms of the Louvre. Clearness, compactness, measure, and balance are evident in nearly every canvas. Everywhere is the air of reserve, of intellectual good-breeding, of avoidance of extravagance. That French painting is at the head of contemporary painting, as far and away incontestably it is, is due to the fact that it alone has kept alive the traditions of art which, elsewhere than in France, have given place to other and more material ideals. From the first its practitioners have been artists rather than poets, have possessed, that is to say, the constructive rather than the creative, the organizing rather than the imaginative temperament, but they have rarely been perfunctory and never common. French painting in its preference of truth to beauty, of intelligence to the beatific vision, of form to color, in a word, has nevertheless, and perhaps a fortiori, always been the expression of ideas. These ideas almost invariably have been expressed in rigorous form — form which at times fringes the lif elessness of symbolism. But even less frequently, I think, than other peoples have the French exhibited in their painting that contentment with painting in itself that is the dry rot of art. With all their addiction to truth and form they have followed this ideal so systematically that they have never suffered it to become mechanical, merely formal — as is so often the case elsewhere(in England and among ourselves, everyone will have remarked) in instances where form has been mainly considered and where sentiment happens to be lacking. Even when care for form is so excessive as to imply an absence of character, the form itself is apt to be so distinguished as itself to supply the element of character, and character consequently particularly refined and immaterial. And one quality is always present : elegance is always evidently aimed at and measurably achieved. Native or foreign, real or factitious as the inspiration of French classicism may be, the sense of style and of that perfection of style which we know as elegance is invariably noticeable in its productions. So that, we may say, from Poussin to Puvis de Chavannes, from Clouet to Meissonier, taste — a refined and cultivated sense of what is sound, estimable, competent, reserved, satisfactory, up to the mark, and above all, elegant and distinguished — has been at once the arbiter and the stimulus of excellence in French painting. It is this which has made the France of the past three centuries, and especially the France of today — as we get farther and farther away from the great art epochs — both in amount and general excellence of artistic activity, comparable only with the Italy of the Renaissance and the Greece of antiquity.